If you grew up here in SoCal, you probably remember going to Santa’s Village. 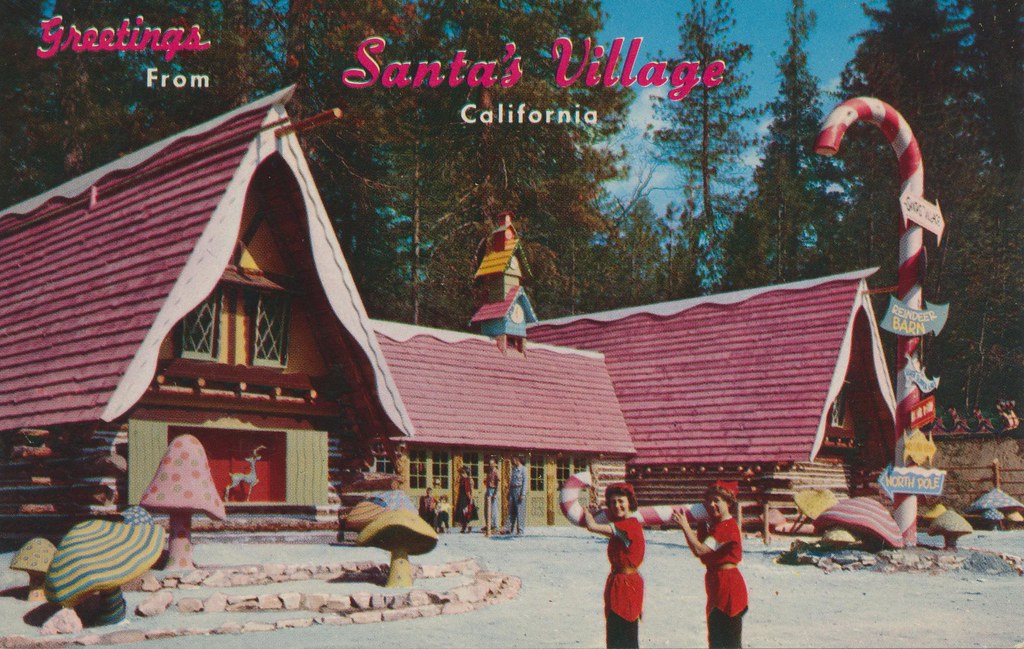 Santa’s Village was a winter themed amusement park in the Skyforest area of Lake Arrowhead.  Opened in 1955, more than a month before Disneyland, it was the first franchised amusement park.  The park covered 220 acres and was one of SoCal’s biggest tourist attractions.  It had rides including a bobsled, monorail, and spinning Christmas Tree ride, and also included a petting zoo, live reindeer, and shops that included a bakery, candy kitchen, and toy shop.  And don’t forget Santa himself, which everyone could visit in his home!

Alas, reduced attendance and revenue shortfalls caused Santa’s Village to close in 1998.  The property sold three years later for $5.6 million and served as a staging area for local logging operations.  If you have ever driven by on the Rim of the World Highway, you have probably seen the park’s faded candy cane signpost and dilapidated buildings.  But the story does not end there.

On May 15, 2014, there was a pending sale of the property to an unidentified Lake Arrowhead resident who was stated to have “big plans for the property”.  Later, those big plans were revealed to bring Santa’s Village back with other recreational/action sports attractions in Spring 2015!  It will be called SkyPark at Santa’s Village.

So if you were a Santa’s Village fan, consider this a Christmas present for you!

Merry Christmas everyone and a happy New Year!  -mike

A joint mission between NOAA and NASA has yielded data showing just how much brighter Earth is during the holiday lights season. In some places, the effect makes the area 50% brighter than on an average day.  Check it out!

ESRI has released ArcGIS Pro 1.0 in the 10.3 release of ArcGIS.  It comes with your ArcGIS Desktop licenses.  For more information, visit the ArcGIS Pro page.

Looks like ESRI released the Android version of Explorer for ArcGIS.  Check it out.

If you are last minute shopping for Christmas and need to find a gift for someone who likes maps, how about Cartography Ornaments?  Check it out.

I will start off the bat here and say I despise the Web Mercator projection. Web Mercator is a mathematically flawed version of the world Mercator, though it is used primarily in web based mapping programs.

Web Mercator really does not have a place here for me in local government. Because I deal with a more local scale (I use the California State Plane Coordinate System), the more global scale Web Mercator does not make sense for me to use. However, the likes of Google, Bing Maps, and ESRI following Google’s lead, kind of forces you to accept the projection if you want to use their services in your applications.

And then there is the history behind the confusing EPSG code used for the Web Mercator projection. Back in 2005, developers started projecting their own spatial data to overlay on Google and Bing Maps. EPSG was rather dismissive of the system used by Microsoft and Google and refused to assign it an official EPSG code. Their statement:

“We have reviewed the coordinate reference system used by Microsoft, Google, etc. and believe that it is technically flawed. We will not devalue the EPSG dataset by including such inappropriate geodesy and cartography.”

As a result developers needed some other way to refer to the projection used by Google Map, so Google came up with the code 900913 (i.e. GOOGLE) and it was commonly used. Aren’t they smart? This code was never developed or supported by the EPSG. However, in 2008 EPSG finally gave in and assigned it the code 3785, though they added the note “It is not a recognized geodetic system”.

But then just one year later, EPSG deprecated the 3785 code and issued a new code of 3857. The new code number was such a close permutation of the previous code that if you quickly glanced at the two numbers, they might look similar. Adding to the confusion many sites on the internet incorrectly listed the parameters of one code with the other code.

But I digress … so here is a good example why I don’t like Web Mercator and how I worked around it.

It was time for a hack! I’m basically going to create my own map service of the aerial photography in the projection I need.

First I opened up ArcMap and brought in our city boundary layer. This set the projection to what I use. I then added the county map service and it was reprojected to match.

Note the Layer properties are set to the projection I want.

Next I buffered the city boundary by 1000ft. I will want my aerials to go a little beyond my border.

Now for the index grid. I first looked at the properties of the county map service to note the scale for the most detailed resolution, in this case 1:564. Also I noted the DPI used, in this case 96.

Next I maximized my ArcMap window and closed the TOC and other extraneous menus to get a full view, then zoomed to the scale 1:564.

Next I selected File > Export Map and set it to TIFF and changed the Resolution setting to 96 DPI. This gave me the size of the image in pixels that I am currently viewing in ArcMap, in my case 1659 x 844.

Note that if you have a larger or higher resolution monitor, your pixel size will probably be a lot larger than mine.

Next I used the measurement tool to get the dimensions of the display window in map units. Mine came out to be about 810 feet wide by 412 feet tall.

I then rounded down the dimensions I will use to 800 feet wide and 400 feet tall. This will make the index grid polygons a little smaller than the display to allow for a little overlap when exporting.  This will become clearer in a moment.

I then used the Grid Index Features tool to create a grid that will be used to create each image tile.

I used the 1000ft buffer polygon as the input features, set the polygon width to 800 feet and height to 400 feet, and unchecked “Generate Polygon Grid that intersects input feature layers or datasets” (I wanted grid cells that fell outside my buffered area). What resulted was a nice grid that will be used to generate the image tiles.

Note that when I zoom to a tile and set the scale to 1:564, you can see the overlap that will be used for each image. It is important to have this overlap when exporting the images.

I then opened my TOC to remove all layers except the polygon grid and the map service. I also made sure to “uncheck” the polygon grid layer so it would not draw. I then removed the TOC again to get the maximum display in ArcMap as before.

Now for the fun stuff.

I used the Python scripting window in ArcMap to automate the process of zooming to each tile at a scale of 1:564, then exporting the display to a GeoTIFF file using the name stored in the tile grid polygon. Here is my python code that did it:

So what does this do? It first sets the mxd variable to the current ArcMap session, then sets the data frame variable df to the first layer name (which when you open ArcMap the default name is Layer), and then the data frame’s scale is set to 1:564.

Next the gridlayer variable is set to the polygon grid layer, which is the first layer in the data frame TOC. The script then selects all the grid polygons and then using cursors, steps through each record (polygon) to pan to it (thus keeping the scale set to 1:564), refreshes the display for the new view, and then using the value in the PageNumber field exports a uniquely named GeoTIFF file using my specified dimensions. Note that zfill(4) will pad a string to the left with zeros to fill the width of 4, so the PageNumber value of 5 will become 0005 and the GeoTIFF file name will be named 0005.tif.  Fancy!

If you modify this code for your environment, then copy and paste it in the Python window, you can sit back and watch this run, zooming to each tile and exporting the display to a GeoTIFF file. It took about an hour to create 2849 images, 11.9 GB total.

Once created, I then added my tiff images to the Mosaic Dataset. Also make sure to define and build overviews (images for other scales). In the end you get something that looks like this:

Turn on the footprints to see the individual image tiles that make up the mosaic.

Now all there is left to do is create an MXD of just the mosaic dataset and publishing a map service of the new image. I will not go into the details of doing that. In the end I now have a map service in the proper projection that will work for my internal applications. Looky here:

Planning on traveling during the holidays?  Flying?  Stay on top of the travel misery and view Flight Aware’s Misery Map.  The map gives you an interactive look at travel across the country and overlays weather radar showing the obvious connection between bad weather and bad travel.  Hover over an airport and view the connections and the misery.  There is also a timelapse button to view the weather, and misery, in action!

Looking for aggregate census data and boundary files?  Check out the National Historical Geographic Information System.  They include census information from 1790 to the present.

Through the NHGIS Data Finder, users may:

All free of charge!

They have currently released:

After 25 years, the Census TIGER data is still in demand.  Even the USGS plans on using it as the primary source of road mapping data for its National Map Viewer and Topo digital mapping applications.