Geographic masking is the deliberate alteration of locational data to preserve the privacy or integrity of the data being displayed or analyzed. For example, the locations of the nests of endangered bird species may be publicly posted on a web site, but the availability of this data could create inappropriate visits that could disturb or endanger the birds, and so should be masked.

This GITA sponsored webinar on January 20th will discuss masking in the context of geospatial privacy, a topic of great national concern in the era of social media and Wikileaks.  Most of the methods in current use will be discussed, along with their advantages and disadvantages.  How the methods are implemented and what impact they have on geographic and spatial analysis are explored.

Start the new year off right by attending a few GIS conferences.  Check out our GIS Conferences page to see what is in store the first half of 2016 in California!

Check out LA County’s app that allows you to explore changes over time comparing 2011 to 2014 high resolution LAR-IAC imagery.  Just click and drag the time slider bar to see the changes of development and the effects of the drought.

Many, many, many years ago, actually 1993, I remember an interesting email that was circulated about the impossibility of Santa being able to deliver all those gifts to children around the world in one night.

For your enjoyment I have reproduced that email and a rebuttal to share with you all. Merry Christmas and have a great New Year! -mike

As a result of an overwhelming lack of requests, and with research help from a renowned scientific journal, I am pleased to present the following scientific analysis of the alleged phenomenon of Santa Claus.

1. No known species of reindeer can fly. BUT there are 300,000 species of living organisms yet to be classified, and while most of these are insects and germs, this does not COMPLETELY rule out flying reindeer which only Santa has ever seen.

2. There are 2 billion children (persons under the age of 18) in the world. BUT since Santa doesn’t (appear) to handle the Muslim, Hindu, Jewish & Buddhist children, that reduces the workload to 15% of the total – 378 million according to Population Reference Bureau. At an average (census) rate of 3.5 children per household, that’s 91.8 million homes. One presumes there’s at least one good child in each.

3. Santa has 31 hours of Christmas to work with (see ** below). This is due to the different time zones and the rotation of the earth, assuming he travels east to west (which seems logical). This works out to 822.6 visits per second.

This is to say that for each Christian household with good children, Santa has .001 seconds to park, hop out of the sleigh, jump down the chimney, fill the stockings, distribute the remaining presents under the tree, eat whatever snacks have been left, get back up the chimney, get back into the sleigh and move on to the next house.

Assuming that each of these 91.8 million stops are evenly distributed around the earth (which, of course, we know to be false but for the purposes of our calculations we will accept), we are now talking about .78 miles per household, a total trip of 75.5 million miles; not counting stops to do what most of us must do at least once every 31 hours, plus feeding & etc.

So Santa’s sleigh must be moving at 650 miles per second, 3,000 times the speed of sound. For purposes of comparison, the fastest man-made vehicle on earth, the Ulysses space probe, moves at a poky 27.4 miles per second. A conventional reindeer can run, tops, 15 miles per hour.

4. The payload on the sleigh adds another interesting element. Assuming that each child receives nothing more than a medium-sized Lego set (2 pounds), the sleight is carrying 321,300 tons, not counting Santa, who is invariably described as overweight. On land, conventional reindeer can pull no more that 300 pounds. Even granting that “flying reindeer” could pull 10 TIMES the normal amount, we cannot do the job with 8, or even 9 reindeer. We need 214,200. This increases the payload – not counting the weight of the sleigh – to 353,430 tons. This is four times the weight of the ocean-liner Queen Elizabeth.

5. 353,000 tons traveling at 650 miles per second creates enormous air resistance. This will heat the reindeer up in the same fashion as a spacecraft reentering the earth’s atmosphere. The lead pair of reindeer will absorb 14.3 QUINTILLION joules of energy. Per second. Each. In short, they will burst into flame almost instantaneously, exposing the reindeer behind them, and create deafening sonic booms in their wake. The entire reindeer team will be vaporized within .00426 of a second. Meanwhile, Santa, will be subjected to centrifugal forces 17,500.06 times greater than gravity. A 250 pound Santa (seems ludicrously slim) would be pinned to the back of his sleigh by 4,315,015 pounds of force.

If Santa ever DID deliver presents on Christmas Eve, he’s dead now.

** I think the author assumed that Santa had only eight hours to work in any particular time zone (e.g., between 10 pm and 6 am when children would be sleeping). So he has 24 windows of opportunity of eight hours each. But the windows overlap. If, for convenience, we assign all eight hours to the first time zone, then each subsequent time zone only adds one hour. Thus 8 + 23 = 31. The answer is the same no matter how one distributes the hours among time zones.

Now this email was circulated around and a university student forwarded it to a professor who decided to reply with a rebuttal:

The analysis you sent me about the death of Santa Claus, based on classical physics, is seriously flawed owing to its neglect of quantum phenomena that become significant in his particular case. As it happens, the terminal velocity of a reindeer in dry December air over the Northern Hemisphere (for example) is known with tremendous precision. The mass of Santa and his sleigh (since the number of children and their gifts is also known precisely, ahead of time, and the reindeer must weigh in minutes before the flight) is also known with tremendous precision. His direction of flight is, as you say, essentially east to west.

All of that, when taken together, means that the momentum vector of Mr Claus and his cargo is known with incredible precision. An elementary application of Heisenburg’s uncertainty principle yields the result that Santa’s location, at any given moment on Christmas Eve, is highly imprecise. In other words, he is “smeared out” over the surface of the earth, analogous to the manner in which an electron is “smeared out” within a certain distance from the nucleus in an atom. Thus he can, quite literally, be everywhere at any given moment.

In addition, the relativistic velocities which his reindeer can attain for brief moments make it possible for him, in certian cases, to arrive at some locations shortly before he left the North Pole. Santa, in other words, assumes for brief periods the characteristics of tachyons. I will admit that tachyons remain hypothetical, but then so do black holes, and who really doubts their existence anymore?

Hence, to sum up my reply: Yes, Virginia, there is a Bob Knight, and there is an Indiana. Now, what where we talking about…?

And if you made it this far, don’t forget to checkout the Christmas Map I posted back in 2013!

The new Star Wars movie is out and to celebrate, check out The Best Collection of Star Wars Maps Ever!

And don’t forget to tour the Star Wars galaxy too!

If you are into creating your own apps that run on many platforms, then AppStudio for ArcGIS might be for you.  ESRI has release version 1.0 and some of the highlights are:

For more info and to try AppStudio, see their blog post here.

ESRI has announced that ArcGIS 10.4 prerelease software for Desktop, Server, and Engine is now available for you to download, install, and test.  They do stress it is for testing purposes only, so I would not use it in production.

You are required to register a drone if it weighs more than 9 ounces.  Registration opens December 21 and is free through January 20 (the credit card transaction will confirm the owner’s identity and the fee will be refunded).  After that, the FAA will charge $5 for registration.  You must be at least 13 years old to register, or someone older must register for you.  The registration is good for 3 years.

Oh, and the registration rule excludes “paper airplanes that are not linked to a system”, so a paper airplane that weighs more than 9 ounces does not need to be registered unless it has a motor and remote attached! 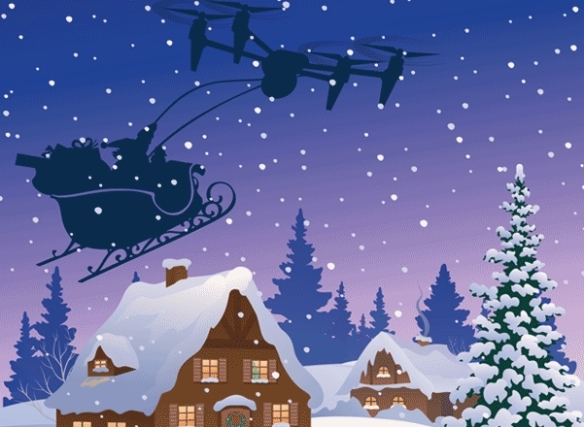