The California Environmental Protection Agency released a study that identifies areas across California experiencing hotter summer temperatures as a byproduct of urban development.

Urban areas have higher temperatures during summer compared with adjacent rural communities, a phenomenon known as the urban heat island. Heat islands are created by a combination of dark pavement and roofs that absorb heat, heat-generating activities such as engines and generators, and the absence of vegetation that provides evaporative cooling.

While the phenomenon is well-known, the study for the first time creates an Urban Heat Island Index (UHII) to quantify the extent and severity of the heat island effect for individual cities throughout the state. The study found temperature increases ranging from a few degrees in small cities and coastal areas to as much as 19 degrees on average over a day in large, inland urban areas.

Click below to read the report on how the Urban Heat Island Index was created and view the maps and data for different urban areas. 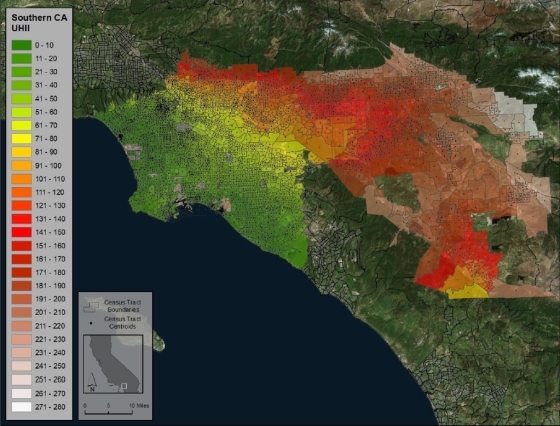