The US Bank Tower in downtown LA (formerly Library Tower and First Interstate Bank World Center) is a 73 story, 1,018 foot tall skyscraper at 633 West Fifth Street and is the tallest building west of the Mississippi River (11th tallest in the US).  The building was constructed from 1987 to completion in 1989.

For many years I wondered why the tallest building in downtown LA never had an observation deck.  It was a bummer not to have one, especially on our tallest building!  But finally in July 2014, the owners of the skyscraper announced construction of an observation deck on the 69th and 70th floors, a restaurant on the 71st floor, and a glass slide outside to slip from the 70th floor to the 69th! 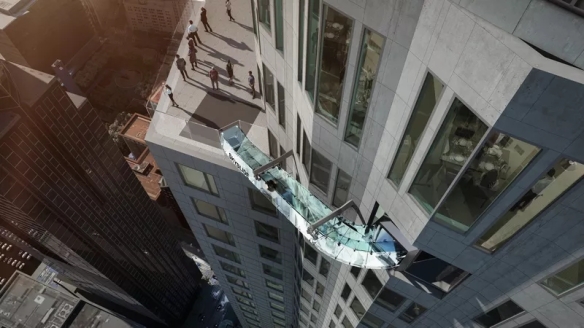 And if you wait until 2017, the new 73 story Wilshire Grand being constructed now will have its own sky-high observation deck and restaurant, plus an infinity pool on the rooftop!