Not too long, in the 1800’s, the south half of California almost became a state named Colorado! 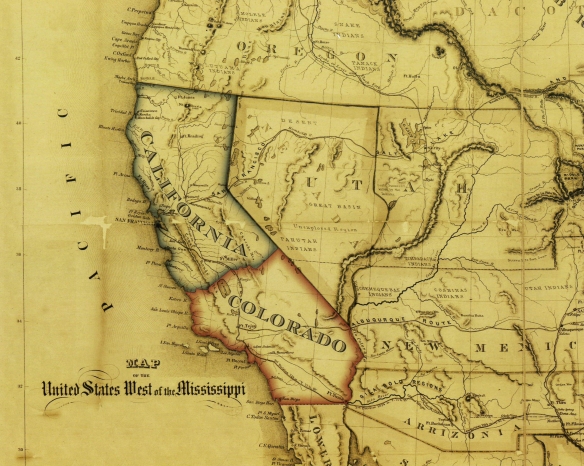 The proposal was authored by Andres Pico, a wealthy landowner.  Pico was a Californio, part of the Spanish culture that had first settled in the region in the 1700’s.

Long before Americans arrived in the far West, Californio agriculture and trade were thriving.  Their problem was the lure of gold.  Once the first nugget was discovered in the region in 1848, hordes of settlers rushed to northern California.  The Californios were quickly outnumbered, and that’s what led Pico to push for separation.  Of course, Pico’s plan would not be the last attempt to split California.  California has been the subject of more than 220 proposals to divide it into multiple states since its admission to the union in 1850, including at least 27 significant proposals in the first 150 years of statehood.  Pico brought California the closest to separation and never again would a plan have such widespread support.  The state legislature, the governor, and the residents were all on board for this one!

Pico’s proposal suggested calling the new state “Colorado”, which by the way ranks among the most coveted state names ever.  Votes were taken and the matter was sent to Washington, D.C., for final approval.

BUT … Congress was not listening because they were preoccupied with a tiny matter called the Civil War.  It did not happen yet, the year was 1859, but tensions were rising.  The folks in Washington just were not interested in California’s plan to slice itself in half.

After southern California’s rebranding attempt failed, the Arizona territory laid its plans to rename itself “Colorado”, however the rectangular state to the north beat them to the prize!

This piece of trivia was taken from the book, An Astounding Atlas of Altered States: The Real Stories of the States That Never Came To Be.  Could be a great gift for someone you know!