In March 1853, Congress appropriated $150,000 to survey proposed routes for a transcontinental railroad. The United States Army’s Corps of Topographical Engineers embarked on the work. There were five surveys conducted. One went from St. Paul, Minnesota to Puget Sound, where Seattle was later founded. Another traveled from St. Louis to San Francisco. A third started in what became Oklahoma and headed for San Pedro south of Los Angeles. Then, there was a route from Texas to San Diego. Finally, there was a survey that traveled the Pacific coast from San Diego to Puget Sound.

Between 1856 and 1861, eleven large volumes of published reports from the surveys were issued by the federal government. They included material on botany, geology, and other natural history elements. One of the books, volume 5, had material on the greater Los Angeles area, titled “Reports of Explorations and Surveys to Ascertain the Most Practicable and Economical Route for a Railroad from the Mississippi River to the Pacific Ocean”.  Click below to view the whole volume.

The report of Lt. Robert S. Williamson of the Corps of Topographical Engineers involved the routes to San Diego (32nd parallel of latitude) and San Pedro (35th parallel).  A reconnaissance trip was made toward Los Angeles.  Here is what was written about San Fernando Pass and Pueblo de los Angeles.

Plate X became the first published view of Los Angeles.  The chromolithograph was drawn by Assistant Civil Engineer Charles Koppel in cityscape view and shows all the existing structures at the time.  The report states the drawing by Koppel “was taken from a hill near the city”, probably Fort Moore Hill. 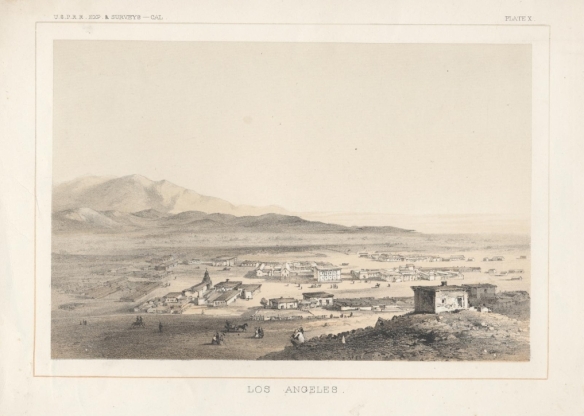 The scene represents Los Angeles in 1853/54, which was about five years after the end of the Mexican-American War. The population was roughly 2,200 people, not all of whom lived in the area covered by the picture.

The top of the picture is roughly the east and slightly south view. The church is Lady Queen of Angeles Catholic church, which was built in 1861, in the same location, with the materials from the original church. The plaza area is in front of the church; both the church and plaza still exist today. The taller building, directly across the plaza from the church, is the Lugo Adobe, which was donated in 1865 for the original location of St. Vincent’s College, a Catholic college and high school, now the oldest college and high school in Los Angeles, and the forerunner of Loyola Marymount University and Loyola High School. The Avila Adobe is on Olvera Street, two-thirds of the way down from the buildings to the right-hand side of the Plaza. The Avila Adobe is the oldest building in Los Angeles, and is still open for tours.