Once again “Daylight Saving” is upon us.  I put that in quotes because nothing is being saved … more like stolen! 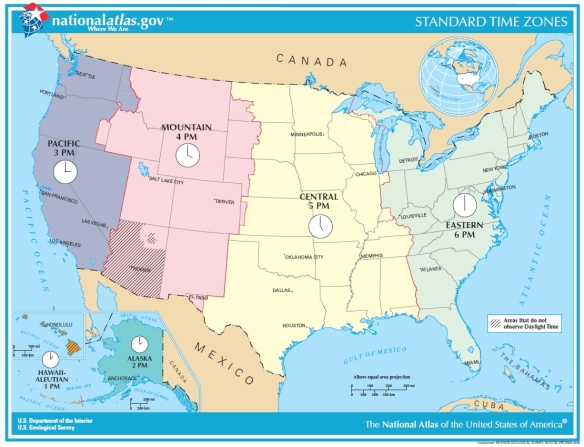 You heard the expression “robbing Peter to pay Paul”?  That is what Daylight Saving Time does, it pushes your state into the time zone to the east, so California moves into the Mountain Time Zone.  But nature does not care, the sun will rise and set as usual, however because you shifted your clock to the east it GIVES THE ILLUSION of setting later in the day … and rising later as well!  If you are a morning person, dealing with that extra darkness in the morning really sucks!

Note that Hawaii and most of Arizona do not observe DST.  Hawaii is closer to the equator so it really does not need “more daylight” like other states farther north.  Arizona, except the Navajo Nation, opted out of the Uniform Time Act of 1966 not because it hated daylight but more because of very hot summer days and nights.

So how much daylight and darkness is really offset by DST?  Using some data and a little GIS, this article found a few interesting things: 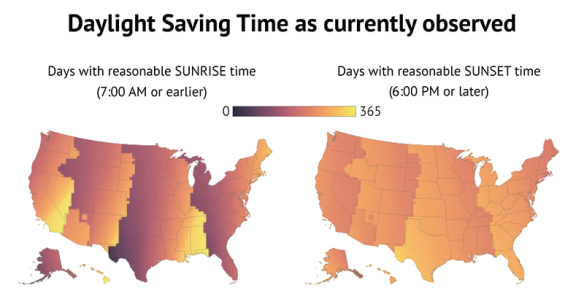 If you love the sun, having permanent DST is probably what you would like, especially for the northern states.  If you are a morning person, not so much!

And just last November, almost 60% of Californian’s voted YES to make Daylight Saving Time permanent.  That was Proposition 7 with the title “Conforms California DST to Federal Law.  Allows Legislature to Change DST Period”.  That was a lie and a half truth!  California was always conforming to Federal law when it came to DST.  Per Federal law via the Uniform Time Act of 1966, a state can only participate in DST as established by the Feds or bail out, you cannot change it to make it permanent UNLESS Congress votes to change the law.  So all Californian’s did was tell the state legislature that if we are ever allowed to go on permanent DST, we give them our blessings to propose it and vote on it!  Of course it would need to pass by two-thirds vote if it ever happens.

Uggh!  Knowing that standard time will not be back until November 3 is very depressing!